Recently, a co-worker of mine asked me to send her “things I would have told my younger self” for In Earnest.

Younger Krystal was a pretty boring individual. I lived in my own world which rarely made since to anyone around me. I was and still am a nerd, a goody-two-shoe, and an overachiever. I just wanted my mom to be proud of me. I was a pretty good natured people-pleaser who was Star Citizen every year in grade school. However, when I look back and really think about my childhood I was bullied until high school and had major racial identity issues. It gets a bit confusing when people continuously call you and Oreo or tell you that you’re the whitest black girl they’ve ever met. I grew up in a strict household and created my own adventures. To be honest, I’m not sure that I really liked myself until around 10th grade. Strange, right? or maybe not strange but certainly sad. Different wasn’t always acceptable and I don’t think that until I moved away from home that I realized I wasn’t too different from lots of other people. I just didn’t fit in Portsmouth, VA. I belonged but I didn’t fit. 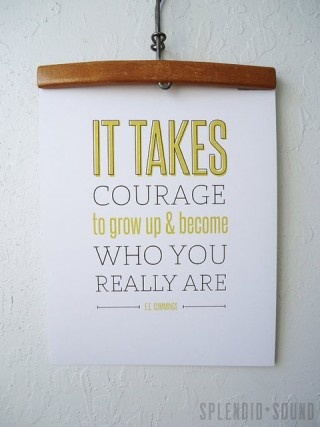 Here’s what I sent to Laura. I don’t think any of it was published but I thought it was reflective enough for me to post here for your perusal. I certainly wanted to keep it someplace for posterity.

I would tell myself that “no” is not a bad word. In fact, it is one of the strongest words that we have the capacity to use in the English language. A good intentional “no” can change your entire world whether you’re on the giving end or the receiving end. It might sting but it’ll be okay. You’ll be told “no” or you’ll say “no” a lot in your life and whenever you get up the nerve, you should totally use it.

SAVE YOUR MONEY!!! –That’s just a great habit that I never quite picked up :/.

I would tell myself to forgive my father. As I’ve gotten older, forgiveness has gotten easier in some ways and harder in others. Conversations between a man and a woman are a whole lot more complicated than those between a girl and a man. It would have been simpler when I was younger. Just call him or tell your mother you want to see him and talk it out with him. Things happened. Everyone makes mistakes but he still really loves you. Forgive and figure out the next steps. Don’t be afraid. You don’t want to have to still deal with “father issues” when you’re 31. It ain’t worth it. Daddy issues are awful! It has made me make men into an overwhelming obstacle. I don’t trust them with my heart. Reason #875 that I’m single. I know, I know, THERAPY!

I would tell myself to be okay with NOT fitting in with the rest of my environment. Preparing myself for that and accepting this piece about myself would have made growing up a whole lot easier. My brother and I were quite bi-cultural due to the two very different environments we had to navigate as African American children who spent time in the hood and the ‘burbs. That piece of our life has proven helpful but it can also be disorienting and sets you up for some hard times in figuring out your “place” in a given situation. Adaptability is important but assimilation is not. You don’t have to lose yourself in your efforts to not stick out like a sore thumb. Instead, use your gifts and watch how others are drawn to you.

I would tell myself that all of the things my mother kept me from doing was super great parenting and that I would greatly appreciate them in the future. She was strict –super strict and I think it made all the difference.

I would tell myself to just relax because all of those Caucasian musical artists that you really want to see in concert but can’t because you’re mom thinks it’s weird that you’ll be able to see them in Nashville in your late 20s and early 30s. Seeing Fiona Apple at The Ryman was a dream come true. Hearing Deanna Carter sing “Strawberry Wine” at Bridgestone Arena brought back so many Governors’ School memories. I would’ve like to have know that there would be a 90s cover band that would make my soul happy.

I would high-five myself for the following:
– Not having sex in Middle School and High School.
– Going to senior prom all by myself.
– Getting up the nerve to tell the mean girl that she could no longer cheat off my paper.
– Being a kick-ass cheerleader and salutatorian.
– Reading all the time.
– Learning how to use my voice and my words instead of my fists to defend myself.
– That amazing summer in Lynchburg, VA at Governor’s School which was when I think I discovered my confidence, beauty, and power.

I would give myself the stink eye for the following:
– Sometimes being the mean girl to others.
– Often being the mean girl to myself.
– Not being the best student leader that I could have been in various organizations.
– Putting way too much pressure on myself to succeed.
– Thinking that I was much better than the people around me.

It’s weird but you really are the person you’re going to be quite early in life. My issues haven’t changed and I’m still good at the same things. I still have the same foundation at 31 that I had at 13. For the most part, I think I quoted over 90% in a previous post, I love myself and all of my stuff.

What advice would you give your younger self?