I haven’t had the best track record with NYE. In fact, it has been pretty awful until I moved to Nashville. When I was in college, I just chilled at home and waited for my mom to get back from church. I’d watch MTV bring in the New Year in Times Square and long for the day when I could go out and be a cast member in some fancy party with a fancy dress and kiss some fancy man at midnight. Even when I had a boyfriend in college, we never celebrated NYE together except by phone. Le sigh!

I moved to Durham, NC and spent one NYE at a bar party on a solo mission with the hopes of meeting new friends in town. That was kind of a bust but I was proud of myself for going in the first place. I spent another year at a fun dance party with good friends and even though I was surrounded by people, great music, and a money drop at midnight, I still felt quite alone. I don’t even remember what I did the other NYE’s I celebrated in NC. Must have been awful :(.

My first NYE in Nashville, my friend Erin was in town and we went to a My So-Called Band (90’s cover band) concert along with 2 of my Nashville friends, Tracy and Jenn. We also ate at a restaurant and had an experience that warranted us getting a free dinner from them a few weeks later. I had a blast! Mainly because I didn’t feel lonely and I was surrounded by music. My second NYE I spent at a house party with great people, fun music, a stacked bar, and it was pretty good. If you can, a house party is certainly the way to go. This year, to bring in 2014, I am going back to the My So-Called Band Concert because well, it beats anything else I’ve done thus far. It’s economical, predictably fun, and I’ll be with at least 2 people that I know and really like. I’ll also get to meet some new people and that never hurts. I won’t get a kiss at Midnight BUT for some reason the universe has decided that I’m not destined for NYE kisses. Deep sigh. I just hope that when I get my kisses, the kisses only meant for me, that they are AMAZING! The universe has some making up to do. Hmph! 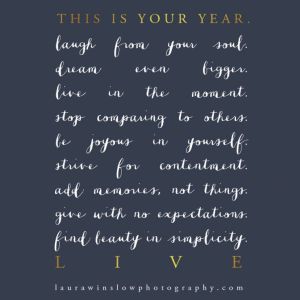 Oh, well. I’m going to make myself look my most beautiful, be open to a fun time, and sing till my voice fails at the show. My goal for 2014 is to live my life out loud and in color so I’m guessing a concert is probably the best way to go.

I wonder if like every other holiday, we hype it up so much that it becomes stressful? Are we doing the right cool thing? What is the right cool thing? Do we have the best dress? We have to spend a crapton of money, right? Then make a resolution to get out of debt :/. We are blessed to celebrate a New Year and nothing should be stressful about that, right? Does it really matter what you do from 9pm-Midnight on the 31st or is it more important what you do on January 1 with this “fresh start”?

What are you doing New Year’s Eve?